Aging and Retirement: All retirement is fundamentally pay-as-you-go (pay-go) 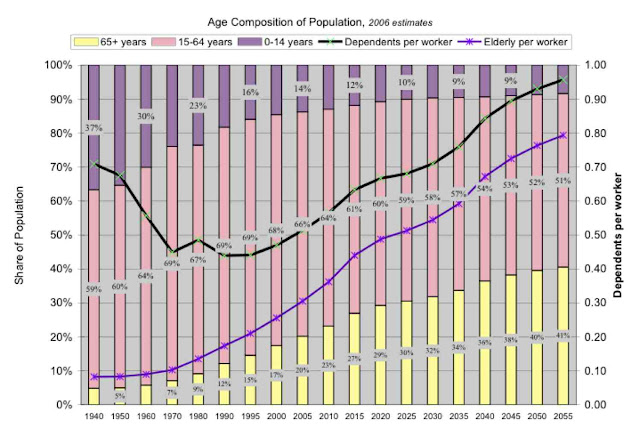 Don’t read your ability to save into an entire economy’s ability to do so!
While individuals can save for retirement, a society cannot: with few exceptions goods and services must be consumed when they are produced.
Because retirees in Japan are increasing in absolute numbers and as a share of the population, the slice of output going to retirees will increase (else times for them will be grim and brief). The flip side is that those in the labor force must therefore reduce their consumption: the old can consume only to the extent that the young do not. At a societal level retirement is thus fundamentally, everywhere and always, a pay-as-you-go system.
Modest exception exist. Housing can be stored, but except as your own residence its value is uncertain.  Japan also has significant international assets, which can be drawn down to increase the consumption of imported goods. Neither change the qualitative analysis, because housing depreciates (lots of bad construction) while the share of trade in Japanese GDP (and assets relative to GDP) is small.
To rephrase, unless those working reduce their consumption, either through voluntary savings or involuntary taxation, retirees cannot increase their consumption. Furthermore, the three-generation household headed by a matriarch or (more rarely) patriarch is now a distinct exception in Japan. Instead most consumption will be procured directly by the elderly, using resources which they and not their children control.
Intrafamilial reallocation still dominates the provision for youth: in most cases (other than education, which is subsidized by the government) the goods and services children consume come from parents voluntarily reducing their consumption. At one time that was also true of the elderly (though for most of human history the share of individuals who “retired” was extremely low; people worked until death, even if they did not work themselves to death.  Hence the pity long held forth for the childless widow, the exemplar of which is the story of Ruth in the Hebrew scriptures, with her entreaties to be adopted into Boaz’ household.
The most important variable is thus the ratio of retirees to those working. The greater the (relative) number of retirees, the more that those working must tighten their belts in order that retirees maintain their standard of living. Note that the ratio of dependents to workers in Japan will not be at unprecedented levels, given the large share of young dependents in societies with rapidly growing populations such as Japan in the 1930s. This is an important reminder: there is  nothing intrinsically unsustainable about Japan’s grey future. It is the minimal role of that the family will play that is qualitative different from the (many!) high-dependency societies of the past.

Note that here “deficit” is based on the budget inclusive of interest payments on debt – which means that the current operating budget must be in surplus. I do not try to address the issue of sub-national debt here. Nor do I try to calculate the extent to which the netting out of government assets to move from gross debt (nearing 200% of GDP) to net debt (100%) is appropriate. For example, BOJ bond holdings are offset by money, and so aren’t owed to the public.
Conveniently, Japan’s net debt is (order of magnitude) 100% of GDP which makes the arithmetic straightforward. As long as the economy averages 1% growth, then the amount of debt can growth by 1% of GDP without the debt-to-GDP ratio (D/Y) deteriorating. Since D/Y = 100% then 1% growth of debt = 1% of GDP in additional debt. All Japan need do is lower its deficit from the current 9% of GDP to 1% of GDP.
Note that 1% growth is a pessimistic number, so I’m not “cooking the books” in favor of sustainability. However, if interest rates rise, then the budget surplus must as well. No sign of that near term!
In order of magnitude, half of that change will come from growth boosting (income) tax receipts. The other half (≈4% of GDP) needs to come from some combination of expenditure cuts and tax increases. Since Japan is in comparative terms lightly taxed, it is clearly possible to enhance revenues without large side effects. but the government is also small in size, so paring expenditures is likely more difficult though politically necessary (“cut waste” before raising taxes).
Now using gross debt instead of net debt doesn’t change this story much – in fact, the arithmetic means that with 1% growth you can run a 2% deficit and not see conditions deteriorate.
But in the background interest paid on debt also doubles, so it’s not a pleasant tradeoff: if interest rates were 3% then with 100% D/Y you need to run an operating surplus of 2% of GDP (hence a deficit inclusive of interest payments of 1% of GDP). With 200% D/Y interest payments double to 6% and so to keep yourself to “only” a 2% deficit requires that you run an operating surplus of 4% of GDP. Ouch. Furthermore, the impact on the budget and the deficits of a short-term spike in interest rates is amplified. With higher debt levels there is likewise less leeway to issue more debt in the face of a recession or a major natural disaster.
The more long-run debt the government issues, the less temporary changes in interest rates matter – my back-of-the-envelope calculation with 2009 data found an average debt maturity of around 5.5 years. Major disasters are to be expected: Tokyo suffers a major earthquake on average once in 50 years, but the last one was in 1923…
Furthermore, the above analysis is well recognized by both political parties (the DPJ and the LDP) and by the general (voting) public. There is however all too good a recollection of the disastrous timing of the last round of budget consolidation – reduced expenditures and a major tax increase all started April 1, 1997, and this was followed by a deep recession, a banking crisis and the onset of chronic deflation. To date this agreement in principle hasn’t been matched by an agreement on specifics, specifically timing.
Since 2011 doesn’t look like it will be a year of robust growth, and there has to be an election by summer 2013, my own judgment is that action won’t be seen until fall 2013. By that point (since tax increases won’t be instantaneous, part of the lesson of 1997) debt/GDP will rise another 20-25 percentage points.
Still, (i) there is no crisis and (ii) the numbers are in the range of political feasibility (raising the consumption tax to 10% will bring in an additional 2+% of GDP in revenue). instituting a tax ID system would close the remainder of the gap.
It helps that Japan is a large economy, has no debt denominated in foreign currency, and indeed has substantial foreign reserves and private foreign assets. Constituents of the European Monetary Union (and sub-national governments everywhere) face a different issue: while institutional investors may want to hold assets denominated in the currency of their debt, they don’t have to hold the assets of any particular sub-national entity (and the smaller the entity – Greece and not Spain – the less the need).
Hence I won’t start worrying until we get through the next election and the timing is still bad.
Posted by Mike Smitka at 7:48 PM No comments: